Eeyore, also known as the melancholy personality type is our organizer. He is the careful thinker, the one who takes his time and looks at all the angles before making a decision. I don’t particular care for the term “melancholy” to describe this personality because of its negative associations, so we’ll just use Eeyore from here on out.

Typically the word melancholy brings up images of sadness or depression. While Eeyores do tend toward pessimism, a more correct definition of melancholy is contemplative or pensive reflection. Eeyore is a thinker, a planner, a consider-er. Nothing flits through his brain. Every thought and fact is held up for careful consideration, its value weighed and measured, and then precisely cataloged in his orderly brain for future reference.

In the world of Winnie the Pooh and the Hundred Acre Woods, Eeyore is usually found alone, sitting quietly. Parents may worry about Eeyore’s propensity for solitude. It doesn’t seem normal for a child to be happiest alone. Yet, for Eeyore, alone time is what he needs most. Being around people, especially noisy, boisterous people, is disturbing for him. Because he is a deep thinker and a less energetic person physically, he is more apt to stop and notice what others miss and then take the time to reflect on what he’s seen. He quite often comes up with the most profound pronouncements about his observations on the world around him. 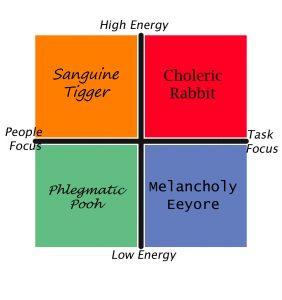 At the bottom right of our temperament chart, Eeyore is low on the physical enthusiasm scale and far to the right side where the need to complete tasks far outweighs any desire to socialize with people. Eeyores get great fulfillment out of bringing order to chaos. Their persistence allows them to soldier on where others quit in frustration. Rather than getting frustrated at a challenge, Eeyore puts his considerable intellect to work and takes pleasure in devising solutions to sticky problems. Eeyore is the polar opposite of Tigger. Being around groups of people, expected to chit chat and be cheery drains the energy out of Eeyore. Given time alone for reflection and introspection actually re-charges his battery. While their slow, methodical approach to life may frustrate more animated personalities, it is a gift that should not be ignored.

This is probably a good place to remind you this description is of a strong, 100% Eeyore type temperament. Most children will be a blend of two temperaments with a little of a third thrown in. You will most likely find characteristics that fit your child in at least 2 of the descriptions. Add in environmental influences, being overtired or plain old emotional fluctuations and some days it may seem a child goes from one extreme to another, never fitting neatly into any description. This is particularly true for children under about 6 years of age. Before that age, much of their character is still forming and it is very difficult to pinpoint their temperament. It is still useful to understand the different temperament types. When a child is being extremely perfectionist for example, you will know it is the need to order and understand a sometimes chaotic world. Guide and direct those traits into their positive uses instead of trying to stamp them out as “character flaws”

Young Eeyore
You can often spot an Eeyore right from babyhood. They are more apt to be late walkers because they don’t like to learn by trial and error. They wait until they’ve got it all figured out, then they get up and go. An Eeyore baby isn’t terribly tolerant of discomfort or crooked diapers. When they grow older, tags have to be cut out of clothing and socks are worn inside out so the seam across the toe doesn’t irritate them. They really don’t like things out of order.

While most kids clean their room only when forced and usually with as little effort as they can get away with, Eeyore makes his bed every day, p e r f e c t l y. There are no wrinkles in the sheets or pillows out of place, it would disrupt his sense of order. In school he is conscientious about his work, completing assignments fully and taking seriously the teacher’s admonition to read a book every week during summer vacation. The world is very black and white to Eeyore, he takes everything very literally.