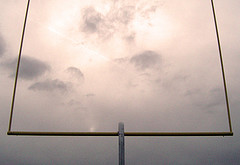 Whatever you believe you can achieve. That phrase gets tossed out a lot, especially in conferences and rallys for business. We hear it so much, we tend to respond with “yeah, yeah, I’ve heard that before.” The good news is, it’s true. There is no “secret”, no “law of attraction” it is a simple truth available to anyone. You don’t have to pay $24.95 for a book to teach you the secret. It’s really very simple: you will move in the direction of your most dominant thoughts.

My son wants to reach a certain goal in his Boy Scout fundraiser. He’s been participating in this particular fundraiser for 6 years now. His first year, he started with a fairly small goal and every year has increased that. His motivation is not to be the top seller or hit a certain dollar level. He finds a prize he gets excited about and does what it takes to earn that prize.  Almost every year he has hit his goal. This year his goal is to sell $2400 worth of popcorn. He will probably make it, because he believes he can. He thinks not about failing, but about what it’s going to be like when he has his prize. His thoughts revolve not around the work, but about the reward. Here’s the kicker though. He’s not going to sit on the couch and meditate on his prize believing it will just magically show up. Some teachings would have you believe that if you want something badly enough and really, really think hard and focus on it, the universe is somehow obliged to give it to you with no other effort on your part.

Remember earlier I said you will MOVE in the direction of your most dominate thoughts? You can’t sit on the couch daydreaming, you actually have to do something, take some action. From the day the fundraiser started, my son has been asking “can we go out selling popcorn today?” He takes the form with him everywhere. He is constantly aware of his goal. Remember, he’s not thinking about the work. He’s not thinking about whether he can do it or not, he’s thinking about his reward.

Our minds are programmed naturally to act in ways that support what we believe. If he believes he will get that prize, doing the actions necessary to achieve it come much more easily. He doesn’t have to make a decision about what to do next, he knows he has to get sales so he goes out knocking on doors. Adults spend so much time thinking about what our next step should be and how we should do it, we get paralyzed by our over-thinking. We think about what needs to be done, we think about our past failures, we think about all the distractions in our lives. Kids don’t have that problem. They think about what they want.

Adults will often pursue goals with the idea of “I want to make more money”. Guess what? You don’t want more money. You want what the money can buy. You need to identify exactly what the money will do for you. Why do you want more money? To buy your freedom from a job? Why do you want freedom from your job? So you can go on vacation whenever you want? Why do you want to go on vacation? Because you love to travel or you enjoy visiting a particular location? Then that is your real goal: to travel, not to make more money. Do this exercise for yourself. Ask yourself why you want whatever it is you want. It may be you want to be your own boss. Well, then, why do you want to be your own boss. Once you have that answer, question that statement as well. Keep questioning your answers with another “why”. Do it at least five times, force yourself to dig deep and come up with an answer. Ultimately you will find what really motivates you and this will be your true goal, not some ambiguous “I want to quit my job”. My son’s goal is not to sell $2400 worth of popcorn. That’s a boring, meaningless goal. His goal is to sail along the neighborhood on a motorized scooter. He can see himself doing that. He knows how he will feel when he’s able to do that on a scooter he earned himself. That is what drives him to go out everyday wearing a uniform he says is uncomfortable, spending his free time knocking on doors.

Our thoughts are powerful. Just as we can achieve positive results by focusing on our goal, we can move toward negative consequences if that is where our thoughts are allowed to go. If you spend your free time reading the latest headlines, bemoaning the state of the economy, or worrying about a flu epidemic, you will get what you are focusing on. Does this mean your thoughts cause the flu? No, of course not. There is plenty of evidence though that people who have a negative outlook on life do tend to have more illness in their body. If you expend the power of your mental energy concentrating on what you don’t want, you definitely will not get what you do want. Our intention should always be to train our brain toward the positive. Consciously choose to think about where you want to go and what it’s going to be like when you get there. Obviously challenges do come up and we can’t ignore them thinking they will just go away because we’re not paying attention to them. But make your response appropriate to the situation. If a crisis in Afghanistan comes up, you can not do a thing about it unless you are the army general in charge of our forces there. Since you’re not, wasting your time freting and worrying only achieves one thing: it takes time and energy away from what you can control.